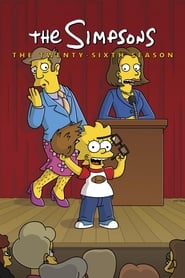 Number of votes: 0
0.00
View All Episodes and Seasons of The Simpsons

In this season, Krusty the Clown retires after his father dies (“Clown in the Dumps”); Homer and Bart attempt to solve some father/son conflicts (“The Wreck of the Relationship”); Marge opens a sandwich franchise (“Super Franchise Me”); the Simpsons meet their former (The Tracey Ullman Show) selves (“Treehouse of Horror XXV”); Mr. Burns finds a girlfriend in Democratic Assemblywoman Maxine Lombard (“Opposites A-Frack”); Bart schemes to bring down his new fourth grade teacher, Mr. Lassen (guest voice Willem Dafoe), who is a terrible bully (“Blazed and Confused”); Homer has a mid-life crisis (“Covercraft”); and the cast of Futurama make an appearance in Springfield in a crossover episode (“Simpsorama”).