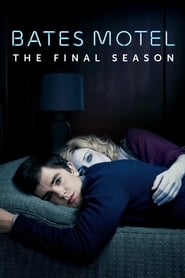 Number of votes: 0
0.00
View All Episodes and Seasons of Bates Motel

The fifth and final season picks up almost two years after season 4. Now a grown man, Norman lives a double life: publicly, he’s a happy and well-adjusted member of the White Pine Bay community, but at home he struggles; his violent blackouts continue to increase as ‘Mother’ threatens to take over his mind completely. Meanwhile, Dylan and Emma have been living their lives blissfully unaware of Norman’s full on descent into psychosis, and a vengeful Alex Romero hungers for a chance to destroy his stepson and avenge the murder of his one true love. In addition, new faces including the iconic Marion Crane, Madeleine Loomis and her husband Sam Loomis, and Sheriff Dana Greene become entangled in Norman’s life causing a chain of events that could blow the lid off his secret life.